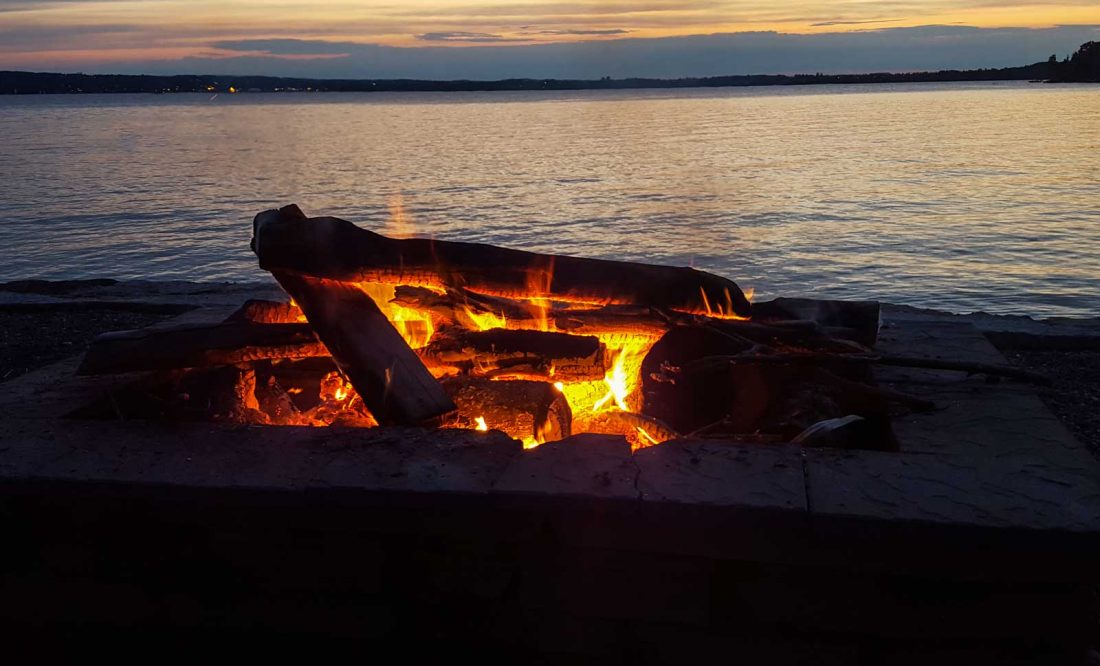 Dad loved to work on yard projects out on Dawson Point and his last project of note was the lakeside firepit. With his chemo treatments done and his hair back to it’s lustrous self, one would never believe what he had gone through the previous year. Thinking back on it, it was also the last little project I worked on with dad and we’ve had many over the years (but nowhere near as many as my sister Kim had – just one of the many benefits of being invited over for a steak supper with only 4 hours of work to be done before meal time).

Dad loved to take pictures and with the introduction of smartphone cameras, he took a lot of them. I inherited his collection when he passed and I’ve been slowly working away at organizing them (not one of his strengths). Recently, I was perusing through them all in search of a specific photo and I noticed that he had taken many photos throughout the construction of the firepit. So for fun, I decided to put them in chronological order to see the ‘story’ they told. I quickly realized that there had been many people who had helped out with its creation so I thought I would share it for all to enjoy.

One of dad’s strengths was his habit of going above and beyond what was necessary for a project and the firepit was no exception. This was and still is a solid firepit. Surrounded by limestone, the firebox itself is about 6 feet in length and about 3 feet wide. It could handle all the driftwood you could throw at it and the area around it was built to accommodate large groups of people. He also had custom post holes welded onto the firebox as his plan was to include a rotisserie spit for a pig roast.

It was used many times before dad passed and it helped create some good memories for quite a few people. I’ve been told that it is still being used extensively to this day which would have made dad happy.

So with that, enjoy the collage of photos which are all from my dad’s phone (with the exception of one video I took)

Building up and reinforcing the lake wall.

Filled and leveled the firepit area.

Cameron helps build the stone wall around the firepit area and cleans up afterwards.

Surveying the area and planning the placement of the firepit.

A trailer full of “Bob Approved” stone arrives. Anyone who has picked rock with dad will know how…. specific… he can be with the stones he chooses. That being said, you could never argue with his method because the results were always fantastic.

The firepit box arrives – complete with welded mounts to accommodate a large spit.

Tim and dad build a mould and then play “Let’s mix cement” for the firepit wall base.

The cement has cured and the firepit box goes in.

Each stone is carefully scrutinized and chiseled to form before being put in place. I sympathize whoever was helping with the carrying of the stones.

Cement is lovingly made in the mixer that contributed to dozens of childhood blisters. The mixture is then used to hold the wall in place.

Kim helps dad load stones into the bucket of the kabuta.

Me, as we prepare to finish off the top layer.

“Burn Day” has arrived. The firepit in action during the day and night.