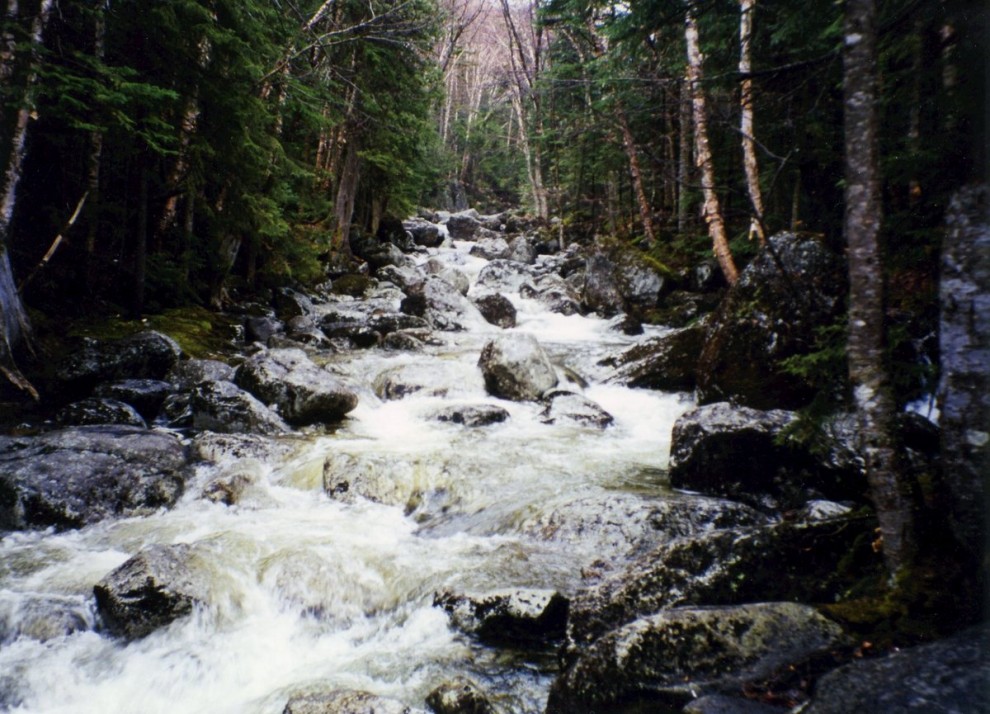 While I settled on the current title for the name of this adventure, “Trial by fire in the Adirondacks (or how Ikea tealights saved us)” is a lot more descriptive of how it went down.

This was my first real backpacking trip and I can honestly say that it taught me most of the lessons I needed to learn for all my future backpacking trips. Painful lessons but at least I

didn’t have to take a survival course to learn them right? Myself, Chris, Sarah, and a friend of Sarah’s were the victims of this trip and it was due to a number of factors such as inexperience, poor communication and packing in too much gear/food. We had all just finished university and figured it would be nice to climb Mt. Marcy in upper New York state since we had about a month off before we started our jobs. It seemed like it would be fun since it is the highest elevation point on the eastern seaboard and we all enjoyed the outdoors. It was a warm and sunny spring in Ottawa and since all the snow was gone we thought it would be a good time to conquer this mountain as our first real adventure.

This three day trip ended up being a real good lesson in group dynamics, learning to follow your instincts, the importance of trip research and and how to react when faced with a problem when you are away from civilization.

Looking back on it, Chris, Sarah and I laugh at the items we were missing and the ones we did bring but should have stayed in the cupboard. Food wise, our menu had other hikers shaking their heads in disbelief for two reasons:

Guess how heavy that is for the person carrying it (me) and then guess what we ate first to lighten the load? No scurvy for us! We also brought a whole jar of peanut butter, a jar of jam, marinated steak tips in tupperware, all the ingredients to make apple crisp (yes including the apples which we peeled and cut up) and to top it off, everything you need to make ‘smores (graham crackers, chocolate and marshmallows).

Let’s just say that we did not go hungry.

Everyone who knows me, knows that I wear shorts for about 7-9 months of the year. Despite my

doctor claiming that I do not have a furnace inside of me, I still think I do so I wear shorts to keep myself cool. As I mentioned, it was a warm spring in Ottawa so we all figured that it would be the same temperature where we were going. It was a hard lesson to learn about elevation and snow belts.

When we arrived at the trail head (we took the often used Van Hoevenberg Trail) just outside of Lake Placid, the temperature was mild but as we climbed to our base camp, we could see small piles of snow off to the side. As we progressed past Marcy Dam, we noticed that the trail was soon covered in a sheet of ice which made for some slow going as we kept on sliding everywhere. Then it started to rain. Instead of stopping, we pressed on because we figured we were closed to where we wanted to camp and that the rain would be like it is in Ottawa; a big burst then a trickle for an hour or two before it ended. Wrong again. The rain lasted for 3 days straight.

Now to acknowledge my own foolishness, I brought a poncho in case it rained (we hadn’t read up on the weather report. Another mistake) and this is one of those Canadian Tire emergency ponchos.

You know the type, it will keep you dry as long as you don’t move. Not the ideal thing to wear while you are hiking through knee deep snow (the snow got more plentiful as we climbed).

We eventually made it to a campsite but a certain someone (the unnamed 4th member) in the group urged the others to keep going to a cabin further up the trail. I did not want to but agreed to go with the majority. It turns out the map we had was a bit old and that cabin we were supposed to stay at? Well it was in shambles so we had to turn back and go back to the initial campsite and setup our tents in the rain as other people had come in behind us to take the good spots while we had decided to head further up the trail.

The 4th member of our group and I didn’t really gel. It is rare that I dislike someone but people who have dominant personalities and who use that trait to bully other people tend to rub me the wrong way. The same person who made the call for us to press on fell into that category and it made the trip a bit more tense than what I was expecting.

After a damp evening in tent city (two tents put together with a tarp covering both entrances) we got up and got the day moving. We decided to try and summit Mt. Marcy in the rain so we started off around mid morning

and slowly made our way up the trail. Our loads were lighter since we had day packs with the basics we needed for the day but the rain made things even more slippery so it was slow going. We hiked up icy trails, over boulders, across a few marshes and eventually found ourselves hiking through snow. I outweighed the nearest person by 50 lbs so when they walked over some snow that was covering a small creek, they made it across without breaking through. I on the other hand would drop right through into the water so my boots were soaked by the time I pulled myself out of the second creek. It was fine because we were moving and I was able to keep warm. Around lunch time we decided to break for a meal. I suggested we eat something quick (cold lunch like a sandwich) so we could stay warm and keep moving but again, a certain someone in the group wanted a full 30 minute lunch because she wanted to get the oven going and make some soup to get us warm (someone please explain to me how standing around for 30 minutes in the rain will help me stay warm?) I was overruled a second time because the argument was made that the heat from the propane stove would keep us warm. Yes, that was her argument.

Of course, the obvious happened, we were all wet and our bodies cooled while standing there.

The soup didn’t warm me up much but it did fill me up. Just before were ready to go, a gentlemen appeared from the path in front of us and he looked the part of an wizened alpine hiker. He told us that he hadn’t seen anyone else on the mountain and that it was starting to snow up there as he was coming down. He went down the path we had come from and I had a sense of ill in my stomach. We discussed the options that lay before us and our resident bully was pushing for us to go over the mountain. I knew that if we did, someone was going to get hurt and it would most likely be me as I was the most exposed. I told them that we had made 2 bad decisions already and that a third was in the making. I them made the decision to head back to camp and if they wanted to continue over the mountain, good luck. Chris & Sarah agreed with me as they knew we were not prepared to do this and realized the risk. We all turned around to head back to camp despite the grumblings of a certain someone.

more enjoyable for everyone else. After making it back to our inundated camp, we noticed both our tents were thoroughly wet and our sleeping bags were damp. Two kind Americans were staying in the lean-to and they invited us in with them to stay the night. We had a ranger’s tarp that I had borrowed from a friend we used that to cover the front side to keep some heat in. The sun went down and I started to shiver as everything I had was damp or wet. One of the Americans lent me a tuque so I could warm up but what I found really helped was six Ikea tealights I had brought along in case we needed light. There was no way we were going to start a fire so the tealights were the source of our heat and those combined with the tuque and tarp allowed us to warm up inside the lean-to. Sarah rewarded their generosity by making apple crisp for everyone.

The trail itself was great (what we saw of it) there was some great views of the mountains,

lakes, waterfalls and some sections where you needed to climb up and down ladders The trees and hills are breathtaking as any place I’ve seen. One can summit of Mt. Marcy and return to the parking lot in one day but it’s best if you leave very early to do (8-10 hour hike I believe).

There are hundreds of black bears in the park as well and you can be guaranteed to
see some if you go down by Marcy Dam or at least so I was told by a park ranger. I’m not the type to go looking for trouble so I didn’t follow my curiosity that time. As well, the park offers pamphlets to backpackers that warn that the bears have gotten so used to hikers and their bear bags. The bears have learned that if they cut the rope with their claws, the food bags will drop and then it’s feeding time. Hikers are urged to tie a white dummy rope to fool the bear into thinking it is the food bag line and use an orange rope tied to another tree as the real bag line. Who knows when they will learn to cut both ropes?

The next morning, we got up, packed up our water logged gear and returned to our cars. On our way back to Ottawa, we stopped in Lake Placid and had some ice cream at Ben and Jerry’s. This would quickly become a tradition on all the trips I took with Chris & Sarah and it was not one that opposed to at all. Sarah’s explanation was that since her body was deprived of calcium for the 2-3 days we were backpacking, it was telling her she needed to replenish it and that ice cream was the perfect way to do it. Who am I to argue with that logic?

After this trip, Chris, Sarah and I became great friends and promised to one another that we would spend the next three years training so that we could one day do the West Coast Trail out on Vancouver Island. We did not make the summit but we had learned so much in our punishing defeat.