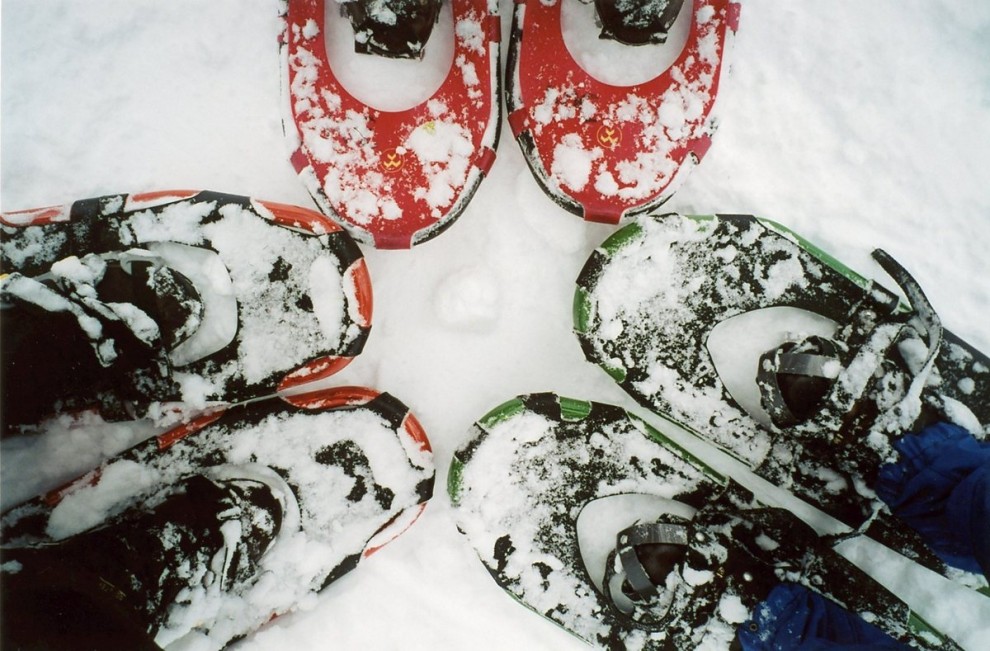 Chris, Sarah and I decided to finally head back to the Adirondacks and reach the top of Mt. Marcy.  We had acquired a lot of experience from backpacking and enduring as a group since our initial Mt. Marcy attempt three years earlier.  In hindsight (my opinion), that first trip was doomed to failure due to a lack of preparation and poor group dynamics but it was a whole new ball game for this trip as we were very confident in our abilities and communication with each other.

We had heard that the Adirondacks had received a record snowfall over the winter and since it was late March we knew there would still be a lot of snow. We decided to try something new and snowshoe in and make camp partway up so we could experience some true winter camping while we hit the peak.

As we drove up into the Adirondacks, we were amazed at the amount of snow.  The trees were completely covered and the snowbanks were as

high as they were when I was a kid.  We easily found the trail head and got geared up in no time.  The early part of the trail was pretty good so we didn’t have to really exert ourselves in deep snow but shuffling upwards with a 40 pound backpack for 4 hours definitely gives one a decent workout. We found out that there was 10 feet of snow in some places and we couldn’t find the trail signs for the camp sites because they were buried under the snow.  We were also seeing the trail from 7 to 8 feet higher than we normal which was interesting as all the trail markers were buried.

Without knowing where the campsites were, we decided to build our own site and figured that since the snow was so deep, we

would not be hurting any parts of the ecosystem.  Once we deemed that we were high enough up, we cut off the trail and trudged up a hill for about 50 feet before making our camp site by packing down an area of snow to set up our tent. Chris wanted to spend a night in a quinzhee (snow house) so we shoveled a lot of snow into a large pile and he spent a good chunk of time digging out his abode for the night.

As this was my first experience with winter camping, I didn’t know what to expect for the whole warmth situation.  Would I be comfortable, warm or constantly shivering?  I decided that whenever I was around camp, I would be move around a bit to stay

warm but I soon found myself moving around too much and started sweating.  I ended up exploring around camp (very deep snow) and helping Chris build his quinzhee. Since I was already pretty damp, I figured I would enjoy it for what it was worth before changing into my dry clothes.  I did a few somersaults off a

rock into the snow and shook some snow filled trees.  The tree shaking gave me more than I had bargained for but I ended up doing this several times.  Was it fun?  The smile on my face says it all.

I then changed into some dry clothes, hopped into my sleeping bag and took a nap. When I woke up,  I was warm and comfy so I didn’t want to venture outside just yet. I knew I couldn’t stay in my sleeping bag all night so I eventually made it outside for supper and then went back into the tent.   The three of us played some cards in the tent, told some stories and turned in.

The next morning, we found out that there was a little leak in Chris’ quinzhee and his sleeping bag was a wee bit wet but aside from that, he said he had a great sleep. We had our typical quick and easy breakfast:

Quaker oatmeal and a few hot rods.  After cleanup, we strapped on our snowshoes and headed off to the summit without our backpacks.  We were making good time and passed several groups of people who were on their way up and met up with a few people who were coming down.

One grizzled veteran who was on his way back down told us that he had done this trek every year for the last 30 years and this was the worst winter he had ever seen.  Not a good sign for us.  He also warned us to be careful at the top because it was starting to snow.  He explained how the snow would cover our tracks and reduce our visibility so we could easily head off in the wrong direction once we got above the tree line because there were no reference points with the low visibility.

After more trudging, we finally came to the tree line and ventured up a bit because we felt that the conditions were still good. We were at a point where we could still see rocks sticking up out of the snow and had decent visibility when we decided to stop for some food.

During the break, we debated if we were going to do the last 600 hundred feet to get to the top and it then started to snow a bit heavier.  We were so close but finally decided it was not worth the risk and we turned back which was the right call as it started snowing even more. The trip down was fast compared to the ascent as we were almost sliding down some of the hills on our snowshoes.  We were back at the camp in record time.  My clothes were soaked as we had been pushing quite hard to make good time.  Since we were ahead of schedule, we decided to break camp and start the trip back to the car. That way we could get back to Lake Placid at a decent hour and celebrate my birthday in town.

The trip back was uneventful and overall we learned a couple of important winter camping lessons without going through the pains.  So despite not hitting the peak (again), it was a great trip.