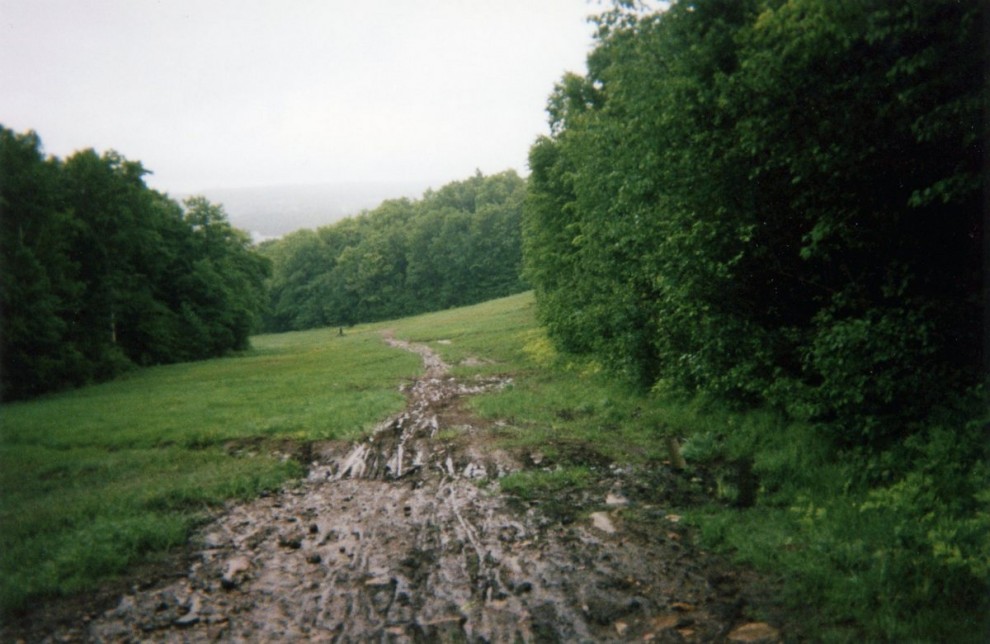 It was my first experience with downhill mountain biking and Mont-Sainte-Anne was not very nice to me. To say that it was pleasant would be a lie. I went on the opening weekend (for the mountain biking season) which was June 1st and you think that the weather would have been fantastic right? Well how does 10c (50F) with driving winds and rain sound to you? Yeah, I felt the same way.

the single track trails which were loaded with enough hills and mud to give someone a good days workout. After about an hour of having mud fly everywhere and the rain pouring on us, we got back to the ski/bike lift and we then noticed that the fun factor had worn off. We were shivering because we were completely soaked and covered in mud. We went inside the lodge and used the washroom dryers to warm up and dry some of our clothes but it just didn’t work out so well. Soon after, the lifts opened and we hopped onto a lift that brought us to the top of the mountain. When I stepped out of the lift, the temperature had dropped to 6c (43F), the wind was howling and I couldn’t see very far due to the fog and rain.

I was a bit nervous about going down but at least I had my trusty Schwinn Homegrown to help me get to the bottom.

That’s right. My hard tail mountain bike (front suspension only) which is a fantastic bike for the trails but not quite built for the downhill riding as I soon learned. Patrick’s dual suspension setup all of sudden became a lot more attractive and yet we both still fell two to three times each. Most of our falls were in mud which was okay but I ended up doing one of those slow motion over your handlebars falls that did a number on my bike ($140 damage) and I banged up my leg pretty good. Patrick was loving every minute of my wipeouts but I got my chuckles in when I would see him skid out on some mud.

I was regretting not reading up at all on downhill mountain biking so I didn’t know what to expect and figured I would take it as it came. While rubber brakes are usually not so good in rain, then became useless when coupled with mud and a steep slope. I was sure that the lack of rear suspension had permanently ruined my chances of every conceiving children and my uncovered fingertips suffered from what felt like minor frostbite. Again, a full suspension bike with disc brakes, full gloves, a helmet that covered my face and a proper rain jacket would have gone a long way into making this ride a lot more fun.

As it is with any trip where hardship is encountered, you always look back on it with fondness. I tried downhill mountain biking a few more times after this and decided that it was not my cup of tea. My preference was the single track forest riding. I haven’t spoken with Patrick in a while but I believe he rides downhill from time to time and as it turns out, I did not ruin my chances on having children. Ride on!