So what is Hearthstone?

Well to borrow heavily from the the Wikipedia entry, Hearthstone is “an online collectible card game developed by Blizzard Entertainment. It is free-to-play with optional purchases to acquire additional cards and access content quicker. The game was released on March 11, 2014 and is available on Microsoft Windows and OS X systems and on Windows 8, iOS and Android touchscreen devices. New content for the game involves the addition of new card sets and gameplay, taking the form of either expansion packs or single-player adventures that reward the player with collectible cards upon completion”

Like other collectible card games before (see Magic: The Gathering), “Hearthstone revolves around matches that consist of one-versus-one battle between two opponents. Gameplay in Hearthstone is turn-based, with players taking turns to play cards from their hand, casting spells, equipping weapons, or summoning ‘minions’ to do battle on their behalf. Games may be between two players, or one human player and one computer-controlled opponent.”

Each player is represented by their chosen ‘hero’ who in turn who represents a particular class. The chosen class determines the special cards and unique hero power available to player for the match. Each hero starts with 30 Health – if that number is reduced to zero, the hero is destroyed, and the player owning that hero loses the match. There is a stable of 9 heroes to choose from. Players can choose to play using one of several pre-assembled ‘basic’ decks or a deck of their own making. While many cards are available to heroes of any class (the neutral cards), a substantial portion are limited to a specific class, giving each hero their own strengths and unique possibilities. 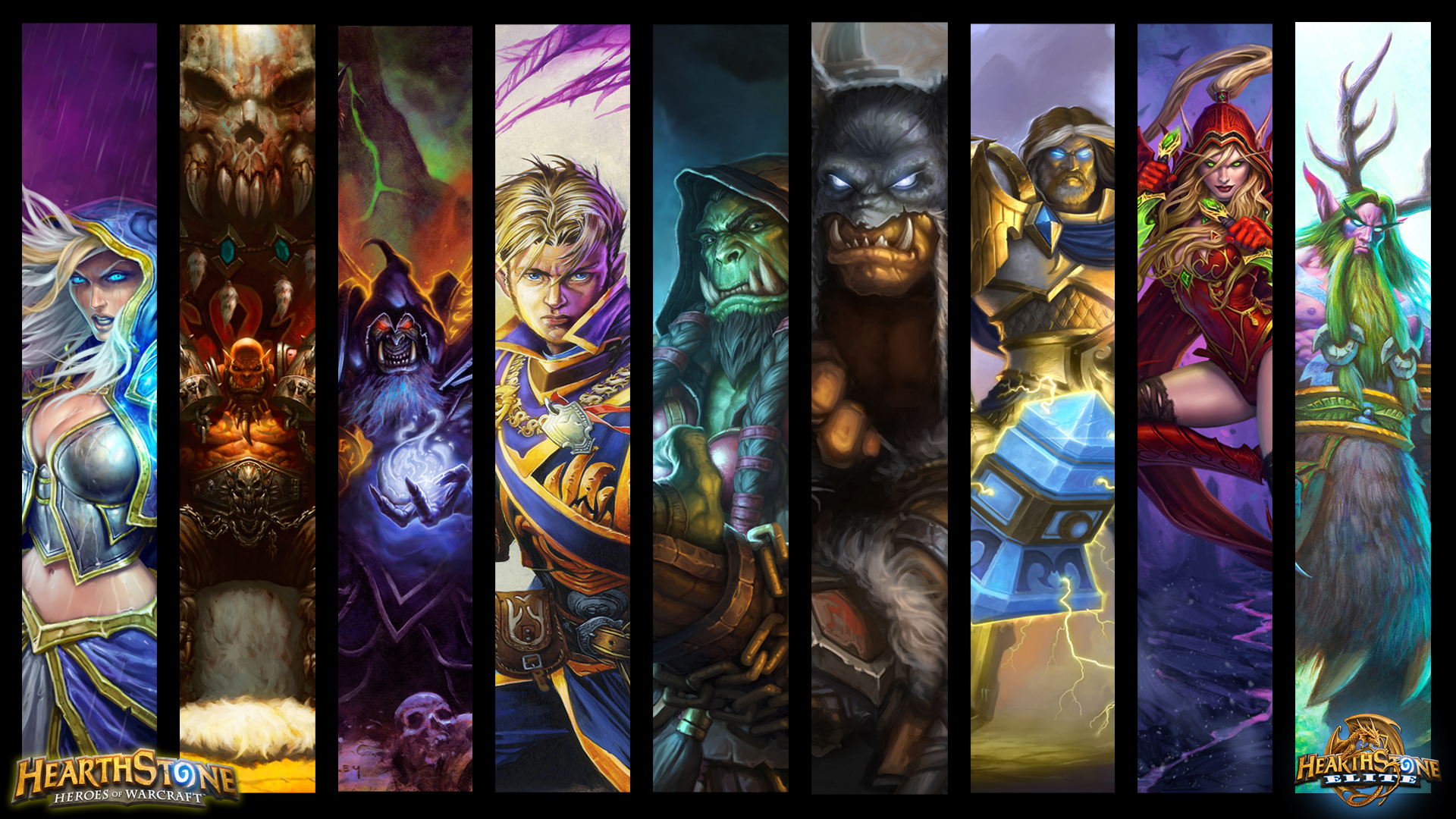 The Heroes of Hearthstone

Choose one of nine classes to annoy the hell out of your opponents.

Blizzard Entertainment is the same developer/publisher who brought us games such as Warcraft, Starcraft, World of Warcraft and Heroes of the Storm. The game is easy to learn, difficult to master and as mentioned before, is playable on a number of devices. I’ve played a lot of games on mobile devices and I have to say that this one is by far the best one I’ve played. Blizzard does an amazing job of getting the experience the same between 30″, 10″ and 5″ screens.

I first played it on a PC a few months ago and have to say that I was pretty impressed with the polish, user interfaces and subtleties that were found throughout the game. Blizzard knows exactly how to hook you but not in the typical pay-to-win type of game that is highly prevalent in the phone/tablet ecosystems.

I have to say that I’ve been playing pretty regularly over the past 2 months and think it’s quite accessible to most since they have a pretty good tutorial and you get to play against computer opponents at the beginning in order to teach you the basics and slowly build your cards that you can use. As of May 2015, there were 30 million registered Hearthstone accounts and in an articled posted in August of 2015, Venture Beat states that Blizzard is taking in about 20 million dollars a month from Hearthstone which is impressive as I know several people who have played it for quite some time and they haven’t spent a penny on it. Of course this doesn’t touch Candy Crush Saga‘s numbers of 1.5 billion in 2014 but I think this gaming experience is more rewarding. I highly recommend that you give it a try.

Check it out on Google Play or the Apples App store.