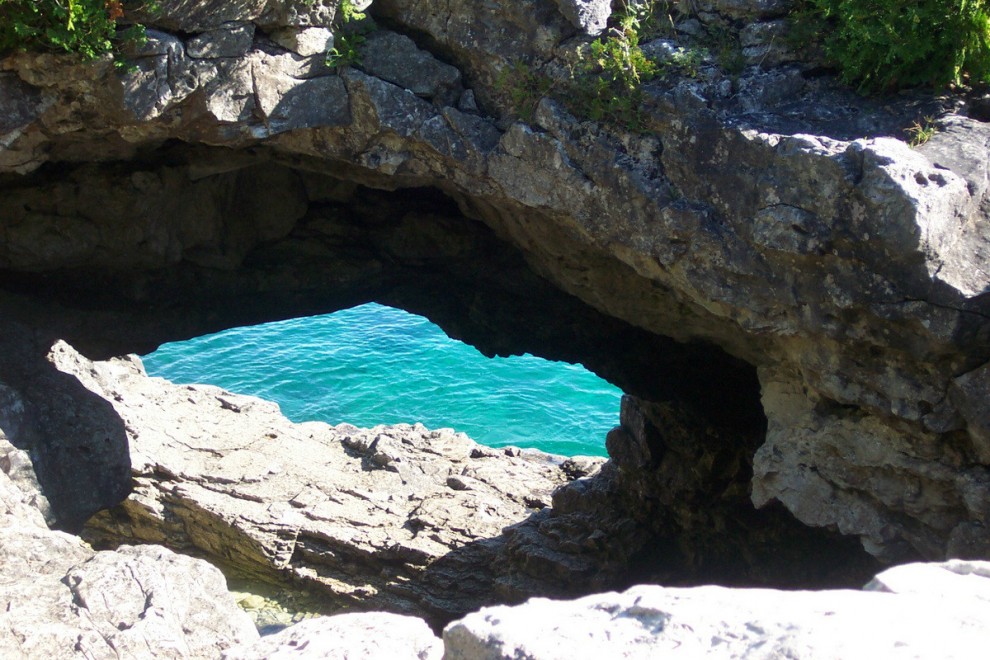 Chris, Sarah and I decided to do a portion of the Bruce Trail as part of a weekend trip. The Bruce Trail itself stretches from the Niagara Peninsula all the way up to Tobermory. As you can imagine, the landscape changes quite a bit over a trail that long so we figured we would hike a section

that allowed us to follow the coast line of Georgian Bay so we could take in the coastline views and finish in Tobermory itself. Chris and I left Ottawa after work and stopped overnight in Toronto which is where Sarah was working at the time. The next day, we traveled North to our destination and as we zipped in and out of small towns, we came across a small restaurant in Wiarton that was aptly named 3 Friends Cafe. It seemed appropriate that we stop there for lunch and after a tasty meal we were on our way again.

We reached our campground, Happy Hearts Tent and Trailer Park without incident and setup our tents and gear for the weekend. Yes, you read that correctly. The campground was called Happy Hearts. While the name is quite campy (har har), it was a good campground for out tenting needs and would happily

(again, pun intended) recommend it to anyone looking for a place. After setting up, we explored the area and went on a tour of Flowerpot Island. The next day, as we were headed to our drop off point, I was reminded of the time I had hiked this section of the Bruce Trail with Jonathan. To this day, he reminds me how I almost marched him to death on that hike. Truth be told it is one heck of a workout so I’m okay with him ribbing me about it since I may have misled him on what was required to do it. During that hike, it was Jonathan who started singing “It’s a long way to Tipperary” but he replaced Tipperary with Tobermory and it became a theme song up until the point where he blanked out and fell into a trance likes state where conversation with him was not possible. To this day, he still cannot remember the latter portions of that hike. We probably should not have worn running shoes for the hike.

For my second hike through this area, Chris, Sarah and I setup the trip so that we left our car in at our campground near Tobermory

and then found someone to drive us out to the trail head the area called “The Dump”. That way we only needed one car and we put ourselves in the situation where we had to finish if we wanted to get back to the car. Not that we needed to but we always thought it was fun to throw in an incentive for whatever we do. In total, we did roughly 24km of hiking that day. The first 23km was trail hiking that ended in Tobermory and the last 1km was the walk back to our campground. The last bit was tough as we were done the trail, had rested a bit in town but our feet were still quite sore and we had to hike along the highway back to our base. Hiking on relatively flat ground for 23km is not a very tough endeavour but when you add rocks, roots, hills and boulder beaches, your feet take a beating.

The Peninsula section of the Bruce Trail is stunning. As you follow the Escarpment along the coast, you are rewarded with the view of

white cliffs, beautiful forests and a sweeping view of deep blue water. Combining all those colours makes for some very good photo opportunities so you will want to bring a camera along for this hike. As we hiked, I looked around and started wondering if I was still in Ontario because it felt like we were in some tropical location. That belief was quickly dispelled as we ended up swimming in the freezing waters of Georgian Bay at about the 1/2 way point when we stopped for lunch. The water was cold, even for me and it was only through constant activity that we were able to stay in for any length of time. We also also came across a caved called “The Grotto” which was fun to swim in. Inside the cave, you can see a tunnel that leads out into the Georgian Bay and though we were tempted to try and swim through it, we knew from our diving courses that distances under water can be deceptive so we opted not to.

After many hours of hiking, we finally stepped out of the forest and into Tobermory. As we walked streets, we suddenly smelled the sweet scent of fudge. After such a long hike, we figured we were up for a treat so we stopped in for a quick purchase and with smiles on our faces, we started the walk back to our campground.

If you are able to do this hidden gem of a hike, I strongly recommend it as it is relatively close to everyone and the only barrier to entry is fitness.