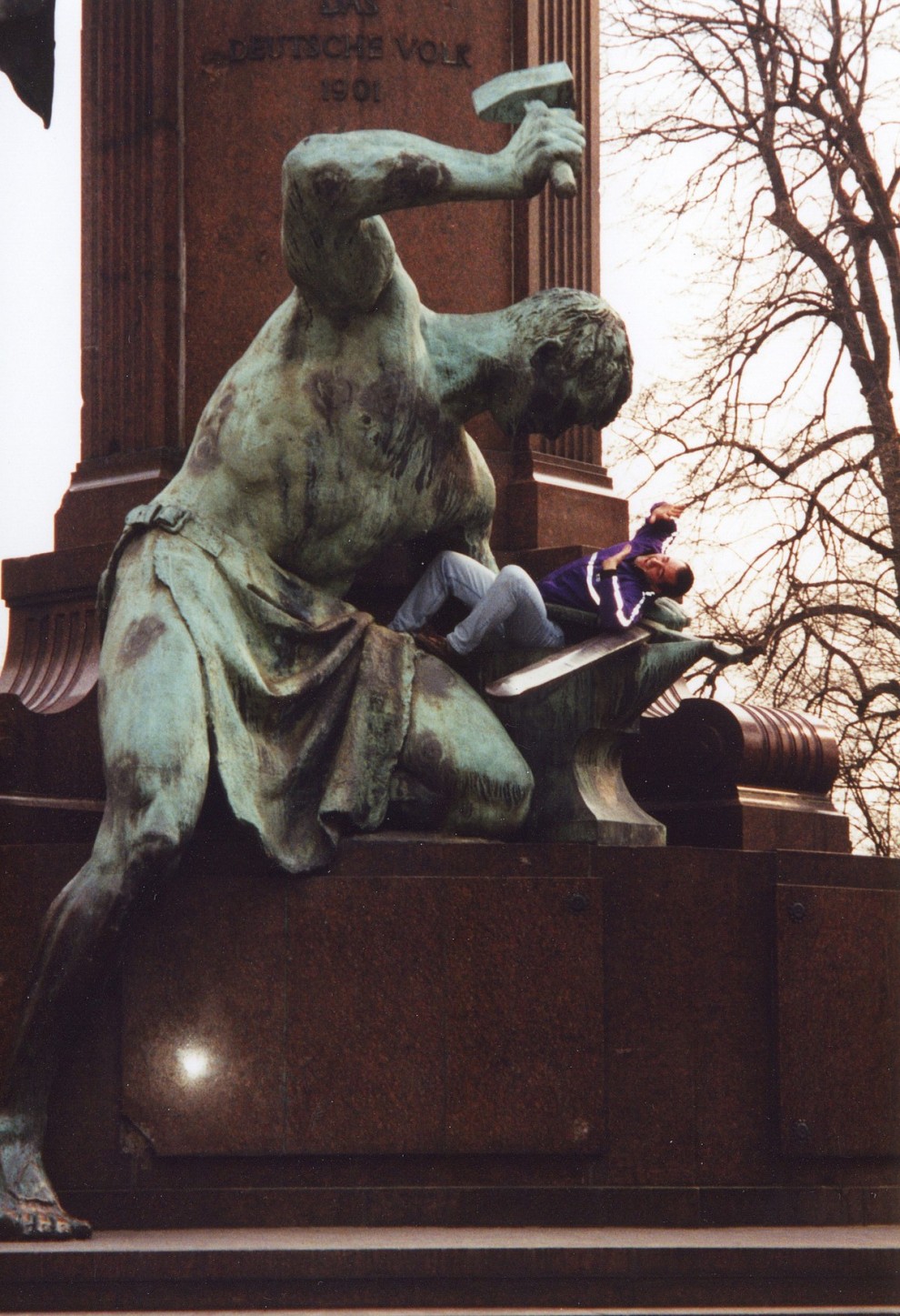 The train pulled out of Amsterdam at 11:09am and we were soon speeding through the countryside on our way to Germany. As Stephanie and I sat in our seats watching the countryside roll by, we heard a voice outside our cabin. “Tickets!”. The cabin door opened and in came the ticket inspector (minus the signature mustache they always seem to have in the movies). His job was to ensure that we had paid what we needed to pay to reach our destination. The EuroRail passes we bought were supposed to cover our travel anywhere in Europe so we presented them to him.

After looking them over, the inspector told us that our passes were only good for certain trains and that we had to pay a supplement for the one we were on. We were a little confused about it but paid the extra fee despite the feeling that we were being scammed.

Apparently we didn’t read all the small print on the ticket conditions and we would end up paying a lot of supplements throughout our trip.

Our time on the train went by quickly as we started talking to a Mexican/German guy from San Antonio who was in the marble business. I remember the conversation focusing a lot on marble, granite and limestone and it was actually quite interesting. He talked about his life for a bit as well and before we knew it, we had crossed into Germany and had our passports stamped. Not long afterwards, the train pulled into Cologne (Köln in German) and we got off the train for a short day trip.

Cologne is Germany’s 4th largest town and was founded in the first century. It was heavily bombed

in World War 2 so there was a real mix of old/new architecture in the town as historic sites were rebuilt after the War. The Lonely Planet guide boasted that the city had 500 pubs which peaked our interest. Overall, I found the prices reasonable (compared to Amsterdam) and we quickly noticed the cultural differences as we walked around. Jaywalking was illegal like it is in Canada but unlike back home, no a single person did it. I remember standing at a street light that had a 20 foot wide road between us and the opposing sidewalk and there were about 20 people on either side. We had the red light, there were no cars in sight and yet, no one crossed. They all waited until they walk signal popped up. I found it very difficult not to step out but being in a foreign country where I didn’t speak the language, I opted to follow the rules.

the largest religious monument for some reason. Some places of worship even boast about having the longest naves and the tallest spires. Sounds to me like over compensation but what do I know? While there, I did learn the difference between a church and a cathedral though. A cathedral is a location where there sits (or once sat) a bishop – pretty easy to remember. The Cologne Cathedral was probably my favourite cathedral out of all the ones I saw in Europe (which was a lot by the end of the trip). Stephanie and walked up all 508 steps to the top of the tower so we could see the World’s heaviest bell and take in the view of the area which was fantastic.

Our other stop for the day was the Cologne Chocolate Museum. You

can check out the link but like the museum, most of it is in German.  Since Stephanie and I did not speak any German, we decided to make up the words for the exhibits and we ended up having a pretty good laugh.  We did get to see the chocolate making process and all the tools they used to make the tasty treats that you could buy.  We also toured the tropical climate room which is where they showed the growth of the cocoa bean.  The smell throughout the museum was incredible and as we neared the end of the walk through, we happened upon the biggest chocolate fountain I had ever seen.  The chocolate came out of the top of this 8 foot tall fountain and it was then fed into large

golden coloured leaves as it made it’s way to the bottom. The diameter of the fountain basin was quite large and it was filled to the rim with chocolate.   Beside the fountain, there sat a small table that offered many wafers that visitors could pick up and dip into the chocolate fountain. Needless to say, it was quite good.

After the museum, we made our way back to the train station as we wanted to hop on a train around

6pm to head over to Bochum where an old flat mate of mine, Yörg, lived. As we were about to get on the train, we were told that if we wanted to take that particular train, we would have to pay a supplement but if we waited half an hour, we wouldn’t have to pay it. We decided to wait for next train (45 minutes) so it was just enough time for us to have to stay around the station. As we waited, I jotted down in my journal that the supplement charges were annoying. As I reread my journal to write these trips, I noticed that the supplements annoyed me a great deal as I see notes about it throughout our trip. I also wrote down that if we had more time in Cologne, I would have liked to check out the medieval parts of the city as well as have a Kölsch beer in a pub since it is brewed in Cologne. How we missed doing that, I do not know.

Stephanie and I arrived in Bochum around 8pm and Yörg was patiently waiting for us. Germans are

very punctual so he was wondering where we had ended up (remember, no cell phones – no texting). Yörg had been a flat mate of mine back in the first semester at the University of Stratchlyde. Aside from being a great person to live with, he was also a good person to hang out with which is why I kept in touch with him (those two qualities don’t always go together). He was just one of many international students that made up our flat (Canadian, Norwegian, Danish, Chinese, German and English) and was only in Scotland for the first school term. Bochum, Germany – a town of about 350,000 – was his hometown where he grew up and he was happy to put us up for a few nights and show us around.

Since it was a bit late, we went back to his place where we met a friend of his (Thomas) and watched a

boxing match on TV.  Graciano “Rocky” Rocchigiani was up against an American boxer and in the end “Rocky” won much to the delight of Yörg and Thomas.   Afterwards, we sat around and talked and I noticed there was a TV music station called Viva that had incredible dance/trance music playing on it and after hearing it once, I listened to it every chance I got while I was in Germany.

The next day, Yörg toured us around many parts of the city and drove us out to a beautiful 16th century moated countryside castle called “Wasserburg Kemnade“.   He then took us to a small town named Hattingen which was built in the 12th century and had been spared from bombs during World War 2.  It was great to see the old buildings (some of them dating back to the 1700’s) and to

experience its history as everything we have in North America is pretty young in comparison.  Yörg introduced us to a few more of his friends (Peter and Susanne) and we ate out at a few pubs over the course of the day.  For supper, I had some snitchel which was great but the beer didn’t taste quite right to Stephanie and I. We obviously did not appreciate it enough back then.  That night, I had trouble sleeping as I was on the carpet and my asthma kept acting up throughout the night. The lack of sleep made for one tired Darcy the next day.

Morning came too soon and after bidding a farewell to Yörg, we took the train into Berlin.  Stephanie and I were so tired (she slept on a love seat the two nights we were there) that we

didn’t talk a whole lot that morning but we finally got our brains into gear by the time the train crossed the city limits of Berlin.  As we entered the capital I remember seeing the Berlin TV tower, Fernsehturm, which stands at Alexanderplatz.  As we neared our destination, a loud harsh voice came onto the loud speaker and barked a lot of German words as the train came to a stop.  We were not at our destination yet but the doors opened and everyone got up and left.  It was clear that the train was not going to be moving anywhere and we had no idea what was going on so we simply followed everyone and hopped on another train.  We lucked out and

the train we had chosen brought us downtown where we made our way to our next hostel:  Die Frabrik which had a very bohemian vibe to it and seemed very clean.  As we settled in, we made friends with a few people who were also staying there.  Over the next two days, Stephanie and I toured around Berlin with a few of our new friends and we took in a lot of the famous landmarks.  Brandenburg Gate, Checkpoint Charlie, the Berlin Wall, the Reichstag and the Berlin Victory Column,

The one landmark that stood out for me was Kaiser-Wilhelm Gedächtniskirche.

Here was a church that was bombed in World War 2 and it was left in that state as a memorial of the war.  It was quite striking to see it in the middle of a developed and thriving shopping/residential area and I still think of it.

After a couple of days of touring around, we had become fairly friendly with 2 other Canadian girls, Carla and Angela.  They were kind of doing the same route as we were but they were going to the Czech Republic and Hungary before Austria. They asked us if we wanted to join them and after a quick discussion with Stephanie, we decided that it would be fun to travel together.

We left Berlin in the late afternoon and after paying another train supplement, we left Germany as we crossed into the Czech Republic.

* Giving kudos to Onana for letting me use their currency rate time machine.
All currency in Canadian Dollars unless specified