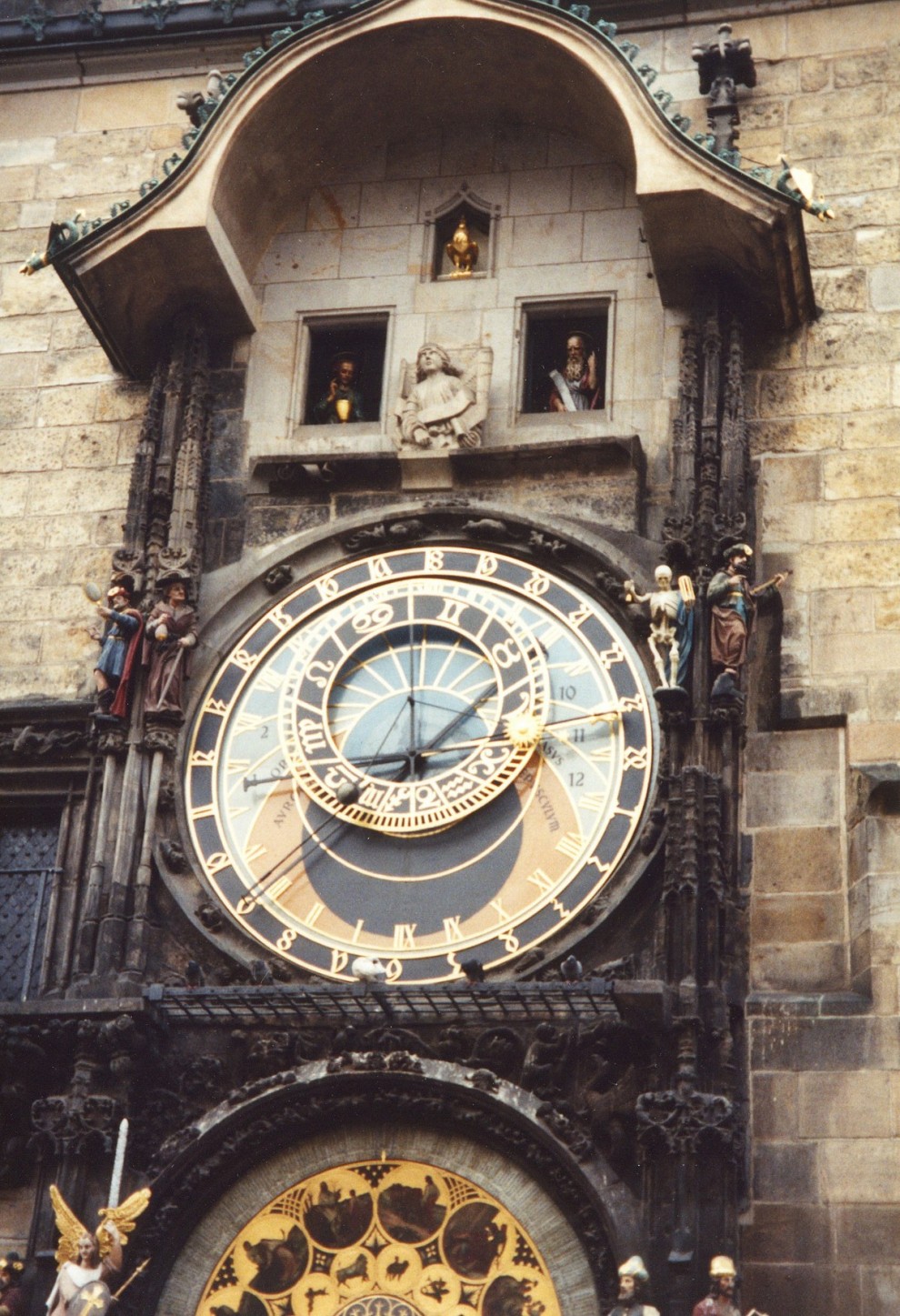 It was late and quite dark when the train pulled into Prague.  Since we had improvised this part of the trip, we had no plans to stay anywhere and no clue on where to go.  As we got off the train, we were approached by many people who wanted to provide us with a place to sleep.  We stood there, not sure of what to do and then a middle aged lady wearing an orange badge came to us and told us in that we could trust those who had official City of Prague badges as they signified that they were vetted by the city.

She then asked if we needed a place to stay and after telling that we were, she told us she had a good spot for us.  Her English was decent and we didn’t have any other options so we we left the station with her and hopped on a city bus, trusting that she would bring us to a hostel or some safe place.  As we sat on the bus, we quickly left the brightly lit downtown area and traveled

through less lit neighbourhoods.  After a while, the neighbourhoods got left behind and we entered into what seemed like a bit of a rundown industrial area with low rise apartment buildings all around us.

Our guide then then rang the bell and the bus stopped to let us off.  As the bus pulled away from us, I felt like I was in a horror movie where the safe vehicle the protagonist was just in speeds off and they are left under a solitary street light in a dark neighbourhood.  Our guide urged us to cross the street with her and then into a 5-7 story low rise that appeared quite dark.  She opened the large wooden door and we saw a dark lobby with wide wooden stairs going up.  At this point, the girls are looking at me now and we don’t know what to do.  The lady tells us to follow her and I’m starting to get a bit nervous.  As we climb the stairs, I remember slipping my backpack off my shoulders just in case we got jumped because I wanted to be mobile in case anything happened. After 3 to 4 flights of stairs, the lady stops at a wooden door and knocks on it.  As we wait, the girls and I look at each other and we were all wondering how in the hell did we end up here after being in the comfort of the downtown area just 45 minutes earlier?  As the door opens, I’m trying to figure out what I’ll do if this turns bad.  The lady speak with a man in Czech and she then turns to us and tells us that we can go in.  She leads and we follow her in and down an unlit hall which ends in a well lit living room where I see 2 kids and a mother watching TV.  The tension drains out of me and the lady who brought us there tells us that the family is willing to put us up for 2 nights for a total of 500 Korunas ($25 CAD).   There is a room with two bunk beds down the hall and we can all stay there.  The family doesn’t speak any English so our guide asks us if we want breakfast in the morning (which we agree to) and then gives us the basics about the rules and then heads out.  With only a few phrases and hand gestures to communicate with the family, we quickly head to bed and fall asleep thinking how the situation could have turned out quite different.

The next morning, we wake up and have a pretty good breakfast of sandwiches and milk.  I’m not going to lie – I was not a fan of the milk because it had the consistency of paint and tasted like it had sugar in it.  Never found out what type of milk it really was.  The shower system was a bit different to say the least.  There was a room just off the kitchen that had the toilet and tub in it.  The mother tried to explain to us how to use the shower but I wasn’t sure how to use the shower head in the tub since there was no shower curtain.   Never mind that there was no door on the washroom and that only a few beaded strings were the only privacy you had from the mother while she worked in the kitchen.  I felt like Atlas as I went down on one knee in the tub and tried to shower up.  I sprayed the wall a bit with the water and when Carla had her turn, she got quite a bit of water on the wall and the paint ended up running off of it. Oops.

Once we were ready, we found out which bus to take to get to downtown (and how to get back) and headed out to explore Prague.

We spent a total of 3 days in Prague and the experience was very good.  The food was cheap and good ($2.50 CADfor lunch), they had the most amazing architecture I had seen anywhere in Europe. We ended up spending a good amount of time

checking out the Old Town Square where we browsed the wares that the local vendors had to sell and the medieval houses that surrounded it.  On our first day in the square, I came across a blacksmith and I was obsessed with the stuff he had created.  Maces, spears, morning stars, daggers, swords (long, short, 2-handed, rapier), armour (chain mail, breast plate, helmets, shields), sheathes and pommels.  This guy had it all.  I really want to buy something from this guy and after rationalizing it for about 3 hours, I called my dad to see if I could buy it and mail it home but the cost was prohibitive so that idea got ixnayed.  I still think about everything I saw there and how authentic it all seemed.  Of course my fascination with this stuff is most likely a result of my Dungeons & Dragons playing

days but what guy doesn’t like this kind of stuff?

Right next to the Old Town Square are notable landmarks like St. Nicholas Church and Church of Our Lady before Tyn but the best of them all I save for last.  It is perhaps the one thing that stood out the most for me on the entire trip.  The Astronomical Clock.   It was such a different thing to see and the legend of its creation was something right out of Greek mythology. Turns out that the legend was just that because I later found out the real story. Which it was because the legend was

. This link summarizes the clock’s life quite nicely.  Regardless if the creators eyes were put out or not, it is worth seeing.

As we wandered the city, we came across a street performer who’s act involved swallowing a 2 foot sword and then hammering long nails into his nose.  It was pretty odd to see and I still cringe when I see these types of acts.  Wonder how he’s doing?  One night we went on a ghost tour where the story teller talked about the executions of rebellion leaders back in 1621.  As he talked, some old guy dressed in rags appears in the alleyway and the guide played it off as the executioner rising from the grave.  The way he appeared gave us a bit of a fright but we all laughed about it later and we took a bunch of playful photos of us with him.

tower) while we were there.  Our daily breakfasts,provided by our hosts, continued to be very basic but quite tasty.  On our last night in Prague, we ate at a swanky restaurant that was in Hotel U Prince and we had a great view of a 7 man jazz band that was playing that night. The food was good but the service was not which was pretty much par for the course while we were in Europe.  Some definite cultural differences but then again, maybe it was because we were just traveling students and not seen as good potential income sources.

Overall, I had a good time with the girls in Prague – we joked around quite a bit got along well.   After the few days we had spent together, we decided we would spend the remaining 2.5 weeks together as our schedules coincided.  Our next country to visit was  Austria and the train we decided to take was an overnight train where we figured we could grab some sleep while we traveled to Vienna.  Wrong.

As we got ready to leave Prague and we got to the train station, it became readily apparent that KISS was in town and their concert had just finished because the station was full of fans dressed as the members.  There was a large group of them (20-30 strong) wandering around the station jumping and yelling. They appeared to be a bit drunk but who knows if they were. It was enough to make everyone else in the station a bit nervous but we found a quiet corner and settled in to wait for our train.  I kept an eye on the Kiss contingent by watching their reflection in the glass. At one point, a Gene Simmons look-a-like pulled out a machete and was waving it around and laughing. I watched as he walked around trying to scare people in the terminal but would leave them alone after a moment.  He then noticed our group and made his way over with a couple of friends and was yelling at us in Czech.  I just sat there, looked up and didn’t say a word.  He started waving the machete around and pointed it in my face but I didn’t budge or react.  I just started at him.  He then started laughing, put the machete away and walked away with his buddies.  They were just trying to scare the crap out of everyone and I have to say they did a pretty good job at it.  While I felt very calm when he was in front of me, my heart was raced for a few minutes after he walked away.

As luck would have it, they boarded the same train as us and it was so packed that a lot of people had to stand.  We lucked out and managed to get seats but the dream of having a cabin to ourselves was just that, a dream. We had heard of travelers getting their bags stolen while they slept on the train so we took turns sleeping while one person would stay awake to keep an eye on things. I slept I slept by wearing my bag on the front of my body and used it as a giant pillow to lean on. It also made it easier to tell if anyone was messing with out bags. We were starting to get a bit wiser but the cost was sleep. In total, I slept for 2.5 hours that night.  I couldn’t wait for the hostel in Vienna.

* Giving kudos to Onana for letting me use their currency rate time machine.
All currency in Canadian Dollars unless specified