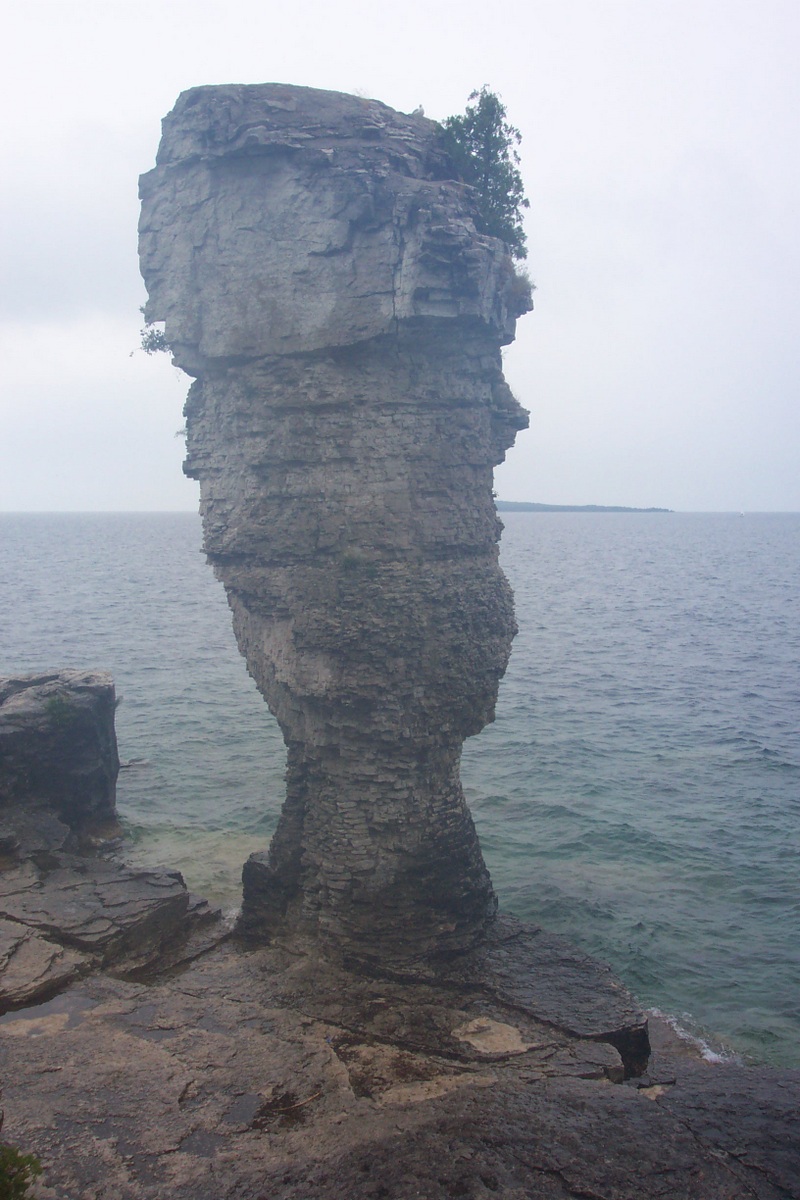 One can find Flowerpot Island in the Georgian Bay, not far from the tourist trap known as Tobermory.  So what’s so special about this island aside from the fact that it houses a nation park and an 1800 year old dead cedar tree?

Well I don’t like to give hints but the island name should be the give-away.  While some of you may think that flowerpots as a dainty and expensive way to display your flowers, the geologists of the world know that they are actually types of rock formations caused by erosion.

Why are these rocks called Flowerspots you ask?  Well for the simple reason that they have the shape of those dainty and expensive flowerpots I mentioned.  The difference being that these formations are amazing and you find yourself wanting to take picture after picture of them.

Regardless of your views on flowerpots, the island has a series of well blazed trails and a multitude of interesting plants and trees to discover.  From an exercise difficulty point of view, I would say that it is a leisurely walk but it can be quite slipper when it rains. The trails are not very long (3km for one that I remember) but there is a lot of variety to see and once you get to the shore, you will have fun walking over the limestone and exploring the area around the flowerpot formations.

The island also has

a lighthouse, a lightkeeper’s house (can’t have one without the other right?) and several other landmarks that visitors can visit after the boat drops them off at the main dock.  The island also has a notorious amount of caves and while most of them are hidden and off limits, I was told the location of one of the main caves thanks to someone who had heard about it from someone else (this time, the rumour game paid off).  After hiking around the island with a few friends and seeing all the standard fair, we sneaked away from the regular area and found a less used trail that led us to the cave entrance.  It was more like a cavern because it was so big but there were boulders everywhere that had fallen from the ceiling which justified why people shouldn’t be in there.

About 6 of us sat in the cave and had some lunch in there as we looked out the two openings from out vantage point and gazed at the trees below.

I actually went back the following day and got to see the island again but this time under the sun instead of the rain.  One of the people I was traveling with noted how different everything looked.  The flora had different colours that were being accentuated because the sun was shining and it was not something that immediately jumped out until you started looking for it.  Oh the things you find out when you hike with a local botanist.

Flowerpot island is practically unheard of but if you are ever in the Tobermory and want to take a break from Scuba diving or spending your money at the fudge store, take the boat over to the island.  It is well worth the time.