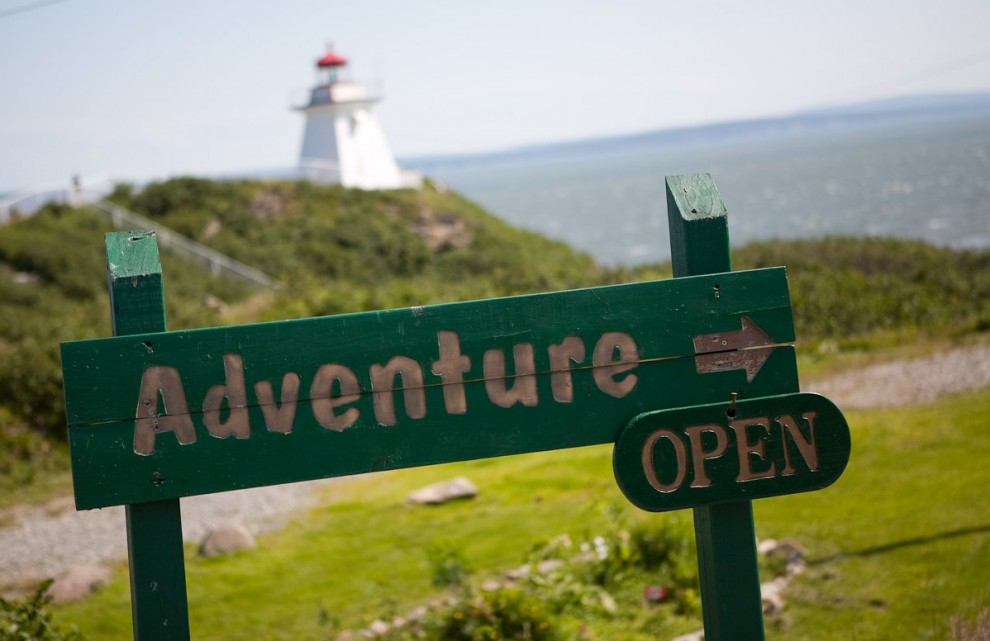 Why so angry Cape Enrage?

While driving through New Brunswick, I happened upon a little place called Cape Enrage which sits in the Bay of Fundy. I was pulled in by the promise of a rappelling adventure. Once I got there, I noticed a lighthouse, a restaurant, a gift shop and a sign pointing to adventure. Skipping the other stuff, I headed over and signed up for the fun stuff. As I waited for the guides to get prepped, I walked around and checked out the area and I realized why the area was called Cape Enrage. The wind was blowing hard, the water in the bay was churning and the energy in the air was not calm at all. This was not a good place for meditating.

Soon enough, things got rolling and the tour guides set me up with the gear I needed: A harness, a helmet and pair of gloves. After a quick instruction lesson on what to do, I was ready to zip down the 142 foot high high cliffs down to the rocky beach below. For those who are unaware, rappelling is the part of rock climbing where you get to zip down the rock face on a rope. The rock face you go down is usually the one you just climbed up and it kind of makes you feel like a Navy Seal from a movie (or whatever your fantasy may be). While some people make it look easy, it can be a bit tricky if you are out in cold or windy situations or if you start going down the line too fast. I tried it back during University when I first tried rock climbing and I had a lot of fun with it and had done it a few other times after that. Anytime the opportunity presents itself, I like to do it.

As I stood with my back to the ledge, I comfortably sat down into my harness and slowly leaned out over the edge of the cliff. That leaning out part is the

hardest part in my opinion. It’s a trust thing and you have to rely on the equipment (and your belaying hand which is your brake and what you use to stop yourself from falling) to hold you as you step off the ledge. By the way, when I said I was comfortable in my harness, that was a bit of a lie. As the pictures will show, the harness hiked up my already short shorts higher and it made me look like a reject from the 70s. Oh yeah, things were tight.

As I slipped down the line, I noticed that my belaying hand was getting very hot from the friction as the rope zipped through my glove. I wasn’t sure what I was doing wrong (hadn’t experienced this before) but figured I would stop

for a second to yell up for advice. The crashing surf and wind pretty much negated any real chance of me having a conversation with those above me so I figured I was gripping the rope too tightly (not going fast enough) or that the gloves were too thin.

As I neared the 2/3 point, the wall cliff suddenly cut in and I was left hanging in mid-air. This is something the tour guides failed to mention and I’m sure it is the highlight of their day to see (and hear) everyone’s reaction when all of sudden, their foothold disappears and people are left hanging. It was a little disconcerting to be sitting in the air – 50 feet up over a stone beach. I started dropping again but I think I was being too tentative and the friction from the gloves really started to burn my palm. When I finally got to the bottom, I took off my gloves and though there were no physical indications, my belaying hand felt very raw. It took me

about 5 minutes of climbing the stairs to get back to the top and when I did, I talked to the guides about the situation and they agreed that I was probably going too slow. They said I could go down again as many times as I wanted for the next hour but I turned it down as my hand was not feeling great and I was worried that I would have to let go on my descent and that would not be a good thing. So a little disappointed, I turned my gear in.

As I wandered around I was hungry and wanted to try the restaurant but it was closed. With little desire to head into the gift shop and not much else for me to do at Cape Enrage, I was off to find another adventure. I do know that they now offer zip-lining and rock climbing as part of their services so if you are even in the area, drop in and check it out. If you try the restaurant, let me know as it sounded somewhat decent.