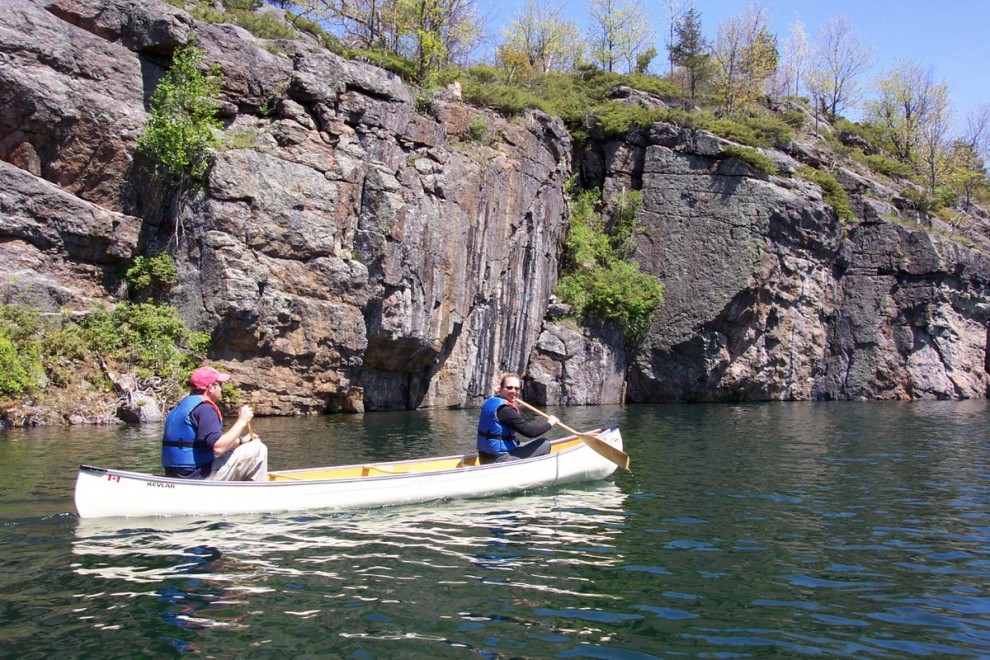 Frontenac Provincial Park has some amazing canoeing/backpacking trails and the great part is that this park is only 2  hours away from Ottawa. It’s one of my favourite spots to visit and I’ve been there a number of times for day hikes but I once did a 6

person canoe trip which included a couple (Matt and Michelle) who were new to the canoeing/portaging scene. I was the official food police for Matt and Michelle to make sure they didn’t bring anything along that was too heavy or cumbersome. Matt is a great cook so we were worried he would try to bring a full roast along with a case of beer. Being in charge of the food was fun as I got to bring along some heavier foods that I don’t typically bring and I was then able to blame it on Matt.

If anyone has ever approached the entrance of the park from the north side, they know that the road is a rally driver’s playground; hilly with lots of curves. It’s just one of those roads that’s fun to drive on and on this particular visit, I was having a blast. The fun ended quickly when I took one small hill a little too quickly and It was at that moment where I got to realize one of my childhood dreams of taking a jump with a car. I just never wanted it to be my car! What happened next is something we don’t need to elaborate on but it involved a tow truck and a new oil pan.

By the time the six of us got into the water, we were running a bit behind schedule (as a result of my brief air time in my car)

and that’s when we saw Matt and Michelle’s relationship go through a little test. It was their first time canoeing together and they were both learning. The mutterings and cursing were a stark contrast to the quiet sounds of the outdoors but thoroughly amusing. We made our way to our first portage which happened to be the longest one we would do – 1.2km. The portage was relatively fun and we all took a break halfway through, I remember Matt having some serious doubts as to why we would willingly put ourselves through it.

We made it to the next lake and found our camp with just a scrap of sunlight left in the sky. It was at this point that we realized how big Matt’s tent was.

An 8-man behemoth that filled nearly all of the allotted tent block!  He was prepared for this trip and then some. When I did the food inspection at the launch, I had to ask him to leave a jar of peanut butter and several other food items in the car or we would have been doing two trips for each portage which is a personal no-no in my book. After setting up camp in the shadow of Matt’s yurt-like tent, we turned in and were soon fast asleep.

The next day was quite eventful as we did a canoe circuit around several lakes and explored some old homesteads we had found on a map.  During our little adventures, we stumbled upon some plants that looked suspiciously like Cannabis but what do I know about that plant?  I leave it to you to decide the species.

We ended up stopping on a small rocky island for lunch in the sun and it was then that I pulled out my surprise contraband food  that I had stowed away in the food bag. A 2 kg log of summer sausage. This thing could be classified as a weapon because of the size alone (nitrates aside) and we cut it up for our sandwiches. It was after lunch that I realized how much 2 kg really was because we had only eaten about 1/2 of it.  Onward we went with the canoes and made our way through the rest of the portages. Everyone had a turn at portaging and we ended up looping around to the 1.2km portage we had done the day before. Without the 40-pound backpacks, it was a breeze.

Back at camp, we made a fire that night and it was the first time that I had used ironwood to make a fire.

The wood is aptly named because of its density and weight and though I do not know the specific species we found, I knew I had found something odd.  While looking for some deadfall for our fire, I found a small log that I should have been easy to life but I could pick it up. I was curious about it and had Matt give me a hand to carry it back to camp.  When Chris saw it, he started talking like some kind of tribe elder telling a story about a legend “in ancient times, this wood was used for…”.  The log was thick so we ended up just cutting it in a couple of spot and shoved it into the fire.  It took quite a while for it to catch but when it did, it burned hot and I have never seen a piece of wood burn for so long.

After supper, Sarah used her outback over to bake some brownies which tasted quite ‘chemically’ and akin to what I suspect

would be what is used to clean toilets.  The majority of the group ate the brownies without comment but Chris (aka Mr. brutally honest) had a different reaction.  It was one that we still joke about today and went along the lines of his gagging, spitting what was in his mouth into the fire followed by a “what the hell was that!??”.  True love I tell ya.   After cooking the rest of the summer sausage on the open fire (Adding a bit of mustard onto the cooked meat was pretty freakin’ good!), we did some marshmallows up and sat around the fire, waiting for it to die out before turning in.  Thanks to the ironwood, that did not happen and we had to extinguish it.

The next morning, we went on a morning hike that found us crossing worn out bridges, beaver dams and searching for old Mica mine pits. We made it back to camp around noon, packed up our gear and started heading back to the launch.   Just after we got into our canoes,

Sarah did an honourable deed.  She laid some flowers on the water to honour a friend’s fathers passing and asked me to take a shot to show her friend.   As we neared the 1.2km portage that we suffered on during the trip in, I told myself that I was not going to stop no matter what as I wanted the challenge.  I took the lead and didn’t wait for anyone else as I knew I had to set my own pace as I knew if I slowed, I would stop. I probably should have conveyed my thoughts to the others as to what I was going to do.

I did the whole distance without stopping and with my shoulders burning, I unloaded the canoe and my backpack. While I portaged, I couldn’t see or hear much as the canoe was on my head and I was just focusing on moving forward.  I didn’t realize that everyone followed me and that Matt/Chris took my pace as a challenge and stepped up to match me.   Matt was in rough shape but he quickly recovered and I got a bit of a talking to by the ladies for initiating a Colombian style death march through the woods.  Oops.

As we made our way back to the launch, we came across a decent sized water snake that I photographed so I could ask the Ministry of Natural Resources what it was.   After we landed, high-fived each other and packed up  the cars, we headed off and I got dropped off at my car to wait which was still sitting on the side of the road with the black oily stains in the dirt behind it. Everyone pooled their remaining water into my water bottle so I could have some water while I waited a tow truck to come and get me. After reading a book for 3 hours, the tow truck operator (who got lost several times trying to find me) finally showed up and towed me to a Kingston VW dealership. It was a pure coincidence that they had a 1999 Jetta VR6 oil pan in stock because some guy had ordered one the week before but never picked it up.  After walking through Kingston suburbia for a few hours while my car was being fixed, I was on my way back to Ottawa.