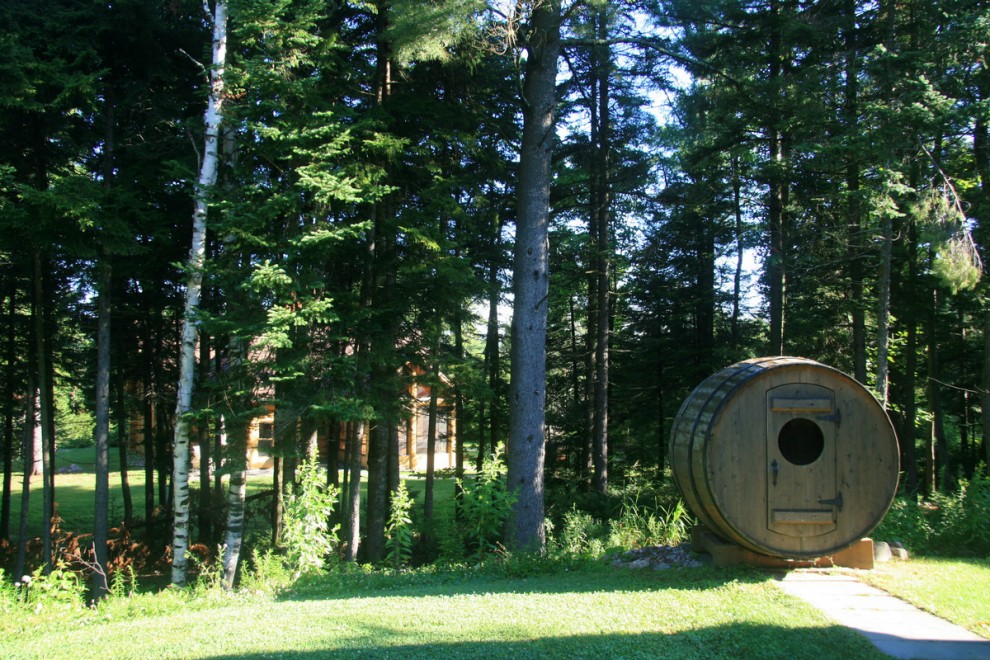 While on our last Insults in the Dark summer trip up in the Laurentians, we kept driving by this place called Fiddler Lake Resort so I got curious and checked it out online.  It seemed like a pretty swanky place and we all joked about staying there the following year.   Fast forward 8 months and it was planning time again and as usual, it was tough nailing down a weekend where everyone was free.  As a result, our choices were limited on where to go and the resort we joked about going to became reality.

We busted our usual budgets for the summer trip but it seemed appropriate as we had steadily increased the luxury of our summer trips every year since we had left the campgrounds of Algonquin Park.  Fiddler Lake Resort offers the picture perfect log cottages that you see in magazines and I we were not disappointed by what we got.  Our party wavers between 4 and 5 people so we chose a cottage that could fit that group size (Known as “The Beaver Chalet”).  FYI – they offer much larger cottages if you want to join two families or something like that for a vacation.

Contained within a gated community style environment, each lot is one acre in size and offers decent privacy while having plenty of room to throw a Frisbee or toss a football around.  The driveways can accommodate many cars since they are quite long and widen as you approach the cottage.  The usual group of Kevin, Joe, Jonathan and I made our way up there and Chris ventured up for a few days as he is usually quite busy in the summer.

When we walked in, we were thrilled with what we saw.  Large open concept, big tables, full kitchen, nice couches and good sleeping arrangements.  Access to a hot tub and a sauna was the frosting on the cake and despite the lack of a nearby sandy beach, it was perfect.  I managed to snag the only solo room in the

cottage ,which was a treat, while the others shared rooms with each other (though they had separate beds – those spoiled b*stards).  A BBQ and an outside patio set finished things off nicely so there was nothing else I could have asked for.

Fiddler Lake Resort has a central clubhouse where people can meet up to do things so we checked it out one day and and it had all the usual stuff you would expect.  Indoor pool (wait..what?), a volleyball court, outdoor pool, upstairs kids play area and a business center.  We didn’t spend much time there but good to know it was available.   While internet access is supposed to widely available, it was not functional as some kind of windstorm had torn through the area and ripped down a bunch of trees and lines which kind of kiboshed the resort’s internet access (which wasn’t that big of a deal for us since we had lots of other things to do).

The five days that we were there there flew by.  We used the hot tub every night, and I tried to use the sauna everyday though I didn’t have a lot of company (when did sauna’s lose their cool?).   We played a lot of boardgames and some favourites began to emerge by the end of our trip.  I’m looking at you Lords of Waterdeep.  I actually brought along my PS3 so we could get some good 4 player competition going and we managed to play a few games but the TV was old (rear projection) and it had seen it’s day so the brightness was pretty weak on it.  We gave up on that after a few games and didn’t bother going back to it.

I spent some good time in my hammock as the weather was perfect and the bugs were not too bad during the day.  We tossed the Frisbee around one evening and heard Kevin complain about sore fingers until he took out his geriatric soft Frisbee that seemed to

cater to his special needs.  Truth be told, I did notice a difference when we used his Frisbee but damned if I’m going to fall into that trap. The BBQ was decent but I believe it had a few too many hot/cold spots on it but once we figured it out, everything was good.

Hiking wise, we didn’t do anything but we did more biking than we usually do.  There about about 100 1-acre lots to choose from at Fiddler Lake Resort so it has a decent gravel road system that we could bike around (quite a hilly area too) and there were a few access roads that we explored but we quickly exhausted those as well.  The lack of a beach wasn’t a deal breaker and you could rent canoes from the main office but the lake itself is only about 3.5 km long which doesn’t make for a long canoe ride.  We drove into St-Sauveur a few times and had dinner there one night which was good.   Chris, Kevin and I did get back to the the trail Le P’tit train du Nord  to do some biking and we had a pretty good time again.  Chris was so thrilled with it that he ended up doing the full length of the trail (via bike) as his anniversary getaway trip with his wife. It’s been on my bucket list for quite some time.

Other than Kevin having a flat tire on the day we left, the trip was free of anything that could have put a damper on trip and if money allows it, we would do something similar in the future though we would find a location that had a better trail system nearby and had a better waterway for us to use since we enjoy canoeing/kayaking a bit on our trips.

Fiddler Lake Resort is pretty sweet but it’s not cheap.  We ended up paying $2000 for 4 nights but we all felt it was worth it and I would suggest checking it out if you want a nice place to chill with the family or with a group of friends.  Being so close to Saint Sauveur is not so bad either as there are a lot of things to do in the area.